Once upon a time, there was an idea for a two-day narrative event, meant to run alongside the Mountaineer GT. That idea fell through, but plans had already been made, multitudinous schemes and plots which could not be easily undone. Two old friends, refugees from the World-That-Was living realms apart, suddenly discovered that they would be in the same place, at the same time, for 48 hours, with no event to attend.

Between Friday evening and Monday morning June 1st through the 4th, my friend / fellow NEO Peter Charles and myself, Alex Polimeni, will endeavor to play the final 3 trials of Warhammer Quest: Silver Tower, complete an entire Firestorm campaign between an all-HERO Stormcast Eternal army and a Flesh-Eater Court, as well as fight a 1250 point, 3rd Ed. Warhammer 40k battle between Imperial Guard and Chaos Space Marines, the latest (but far from last) battle in a slow-burn narrative campaign.

Now, everything’s ready, and by ready, I mean, assembled yet largely unpainted. If we want our games to actually look pretty, we have to go to work for a living. By which, I mean, probably not, if we stand any chance of getting everything painted in time… like this big ol’ bin of re-purposed aquarium scenery and Games Workshop terrain kits:

Fun fact: that’s not all of it

Silver Tower’s coming along, but it’s been a work-in-progress since last summer, when Peter and I first started playing through it with the help of my girlfriend, Katie, and her Grey Seer. 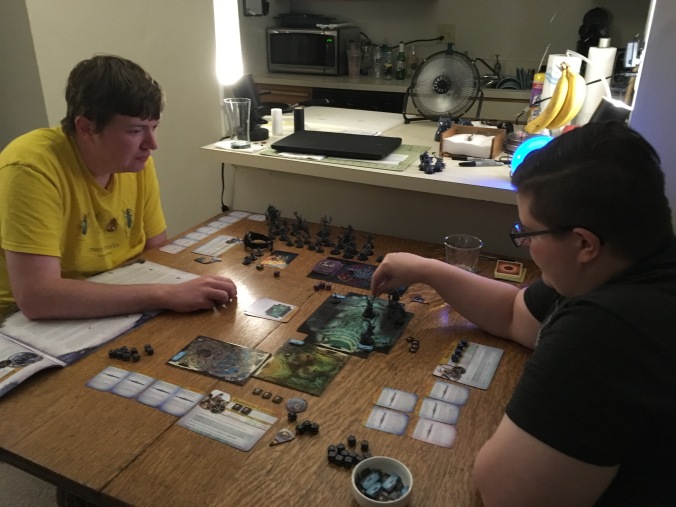 Worst part is, both their characters cast magic missile

Since then, we’ve found time to play 6 of the 9 trials, including missing Peter’s train home our desperate rush to wrap up the Trial of Ulgu after an Ogroid Thaumaturge appeared during a random event, kicked the hell out of our party, and then got curbstomped by a random companion who stuck around only long enough to save our skins.

Since then, I’ve painted our cowardly, self-serving MVP, Peter’s Misteaver Saih, largely out of respectful spite…

… but, the rest remains in half-basecoated purgatory as of this writing.

Now, the shoe’s on the other foot with the Firestorm campaign. Peter’s been developing an elite chamber of Stormcast Eternals called the Death Watch and assembled entirely from HEROs using the Lords of the Storm warscroll battalion. You can read a few of their backstories on Peter’s TGA blog, Tales of Azyr. Know this: they’re each of them a legend reforged, as unique as the Reaper miniatures representing them:

The Death Watch will fight to prevent the Court of the Pale Saint from claiming the Prismatikon and scouring clean the Flamescar Plateau, so as to build a new sanctuary utopia from the ashes to rival Azyrheim itself. I’m reworking a partially-finished FEC army I picked up from a friend; below you can see two of the humble, stoic knights of the Pale Order. 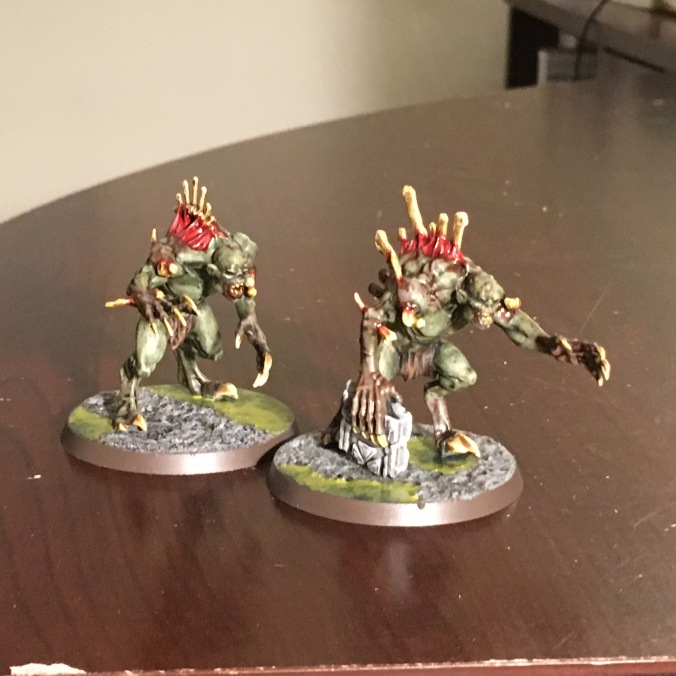 But that’s not all! The siege of Brigannion IV began with a flavor blurb in the 4th Ed. Chaos Space Marine codex and Peter’s sprawling, third-party Imperial Guard army. Now, the Conclave fights to claim the Planet of Steel for the Imperium, beginning with an attempted (and routed) decapitation strike on my daemon-warsmith Manneus Drath… fought on a hotel bed:

That’s a bunker, not an arts & crafts castle on an iPad

While Inquisitor Grossman’s foolhardy attempt on Drath’s life was soundly thrashed, the Conclave secured the landing zones of the oil-wastes, and advanced on my defenses, crushing Apostle Togast and his summoned Bloodthirster through sheer weight of fire.

Now, Task Force Emerald closes in through the southern chem-jungles; Drath has dispatched his reserves, the 18th Grand Company, to counter them. In this dense foliage, neither side will be able to bring their artillery to bear… fortunately for me, the Iron Warriors have other toys.

Not pictured: the second Contemptor dreadnought

Should be good fun.

Unlike this post, the to-be-painted pile knows no end.