Looking back on the first-ever Animosity Weekender has been a long time coming. But, in a nutshell? It was even better than I’d hoped? After picking Peter up at the train station, the strategy gaming started even before we ordered lunch… 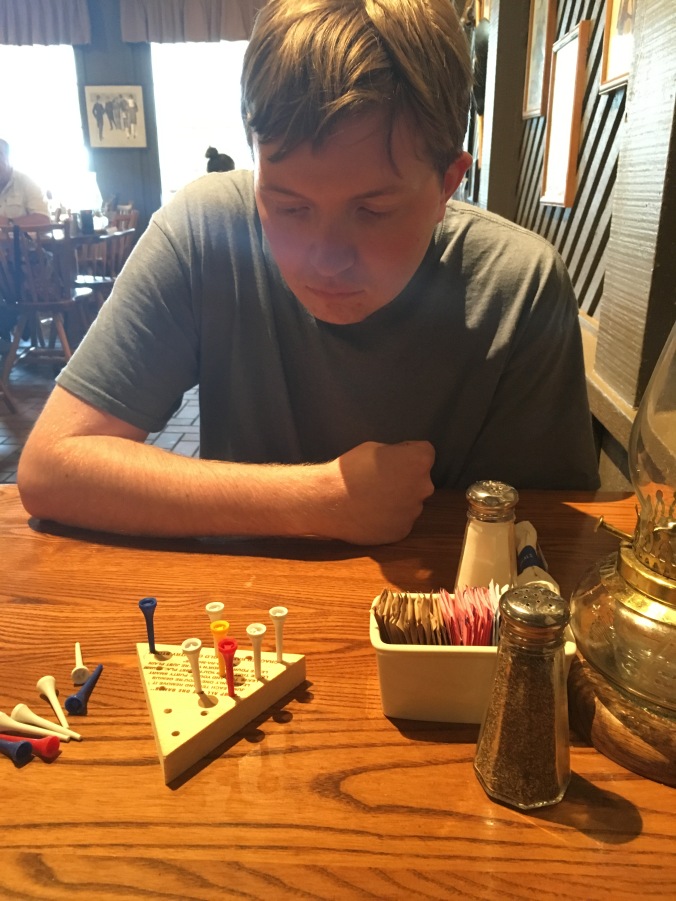 Real talk, these things are actually way harder than they have any right to be.

With the FLGS open by the time we finished our meal, we jumped straight into game one: 3rd Edition 40K, with the Iron Warriors 18th Grand Company of Warsmith Chakotei engaging the 3rd Cuyavale Irregulars, led by Minh Hoang, RCO, commanding. The 3rd was also supported by Minh’s CO Interrogator-Colonel Roach and the 4th Bolugasian Penal Regiment. 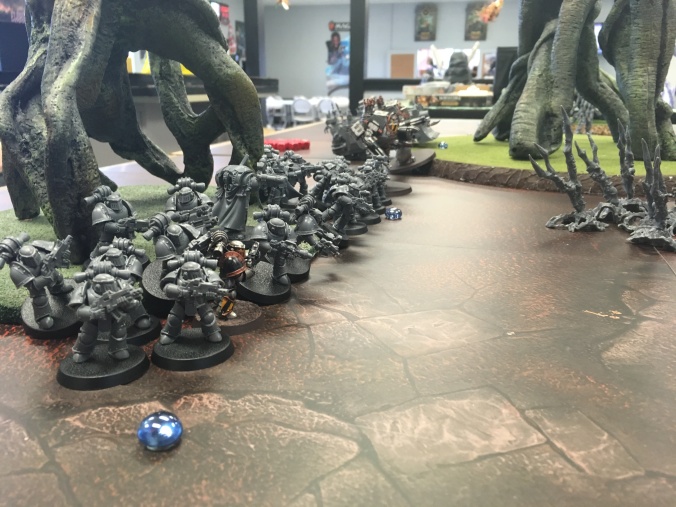 The 18th Grand Company plunges into the surprisingly barren chem-jungle. 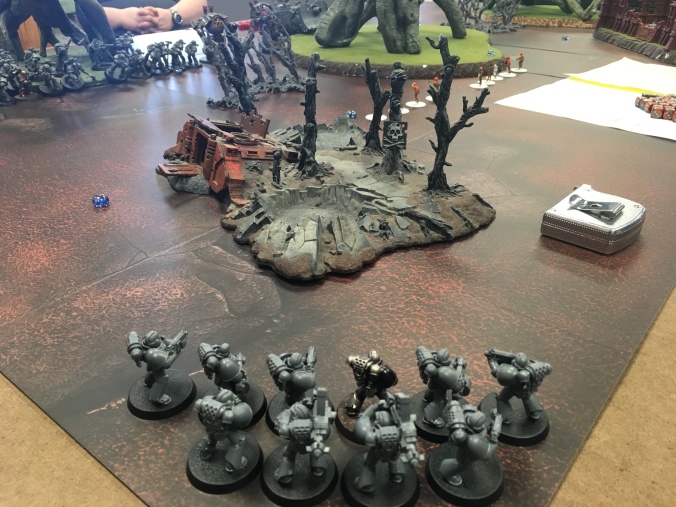 Veteran Havocs infiltrate ahead, but still can’t see anything.

Now, I knew Peter was going to use the old Catachan codex, and I’d even read a copy of the rules before we played. But, I still didn’t *get* it: by these rules, instead of having areas of difficult terrain on an open battlefield, the entire gaming surface is difficult terrain with areas of open battlefield! Furthermore, that difficult terrain limited field of vision, and because his army deployed in hiding, the only way I could discover their positions was if they shot at me or I literally walked into them. So, yeah: this game was very narrative-driven, in that it was very, very disastrous for the Iron Warriors. 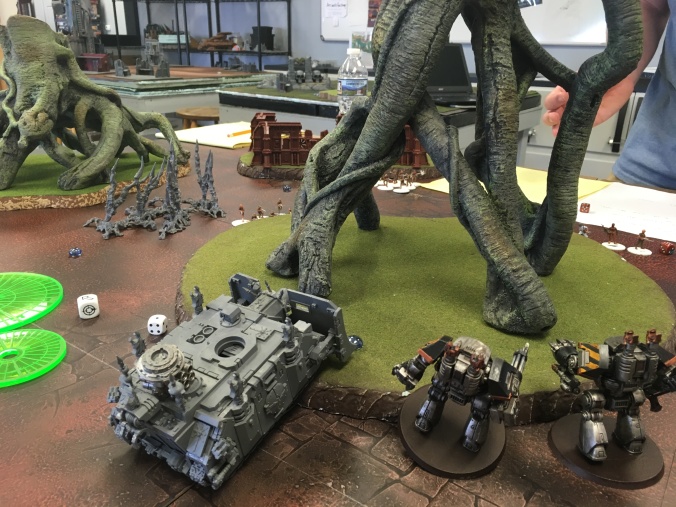 The bit with the tree was open ground. A model in open ground can see 6″ in to difficult terrain. the Cuyavale Irregulars can see into open ground from any distance.  The IV Legion war machines in this picture quickly became so much scrap metal. 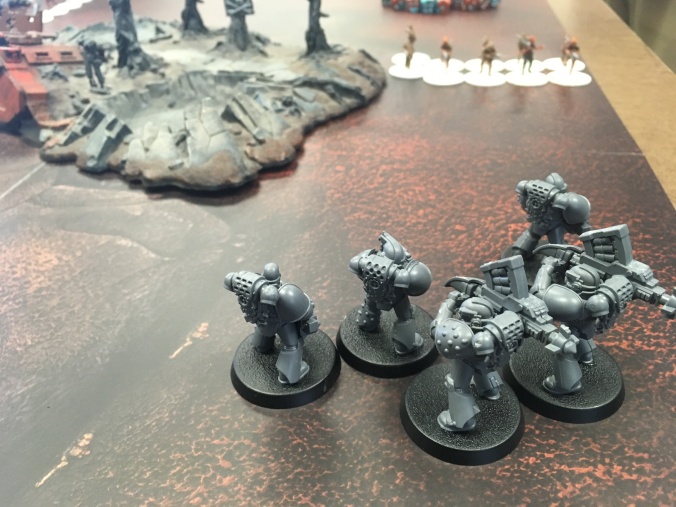 The infiltrated Havocs literally cannot see deep enough into the chem-jungle to target the Guardsmen picking them apart. 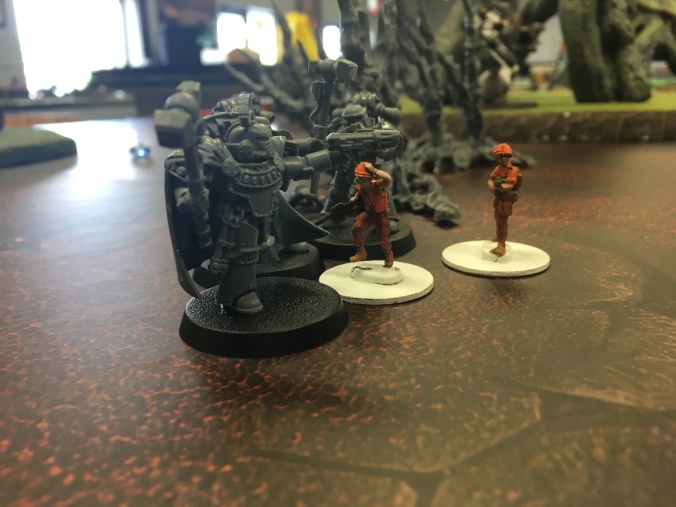 Lieutenant Rarou and what remains of his breacher squad finally over-run a unit of Irregulars, but it’s a Pyrrhic victory, as the Iron Warriors lost more than they killed. 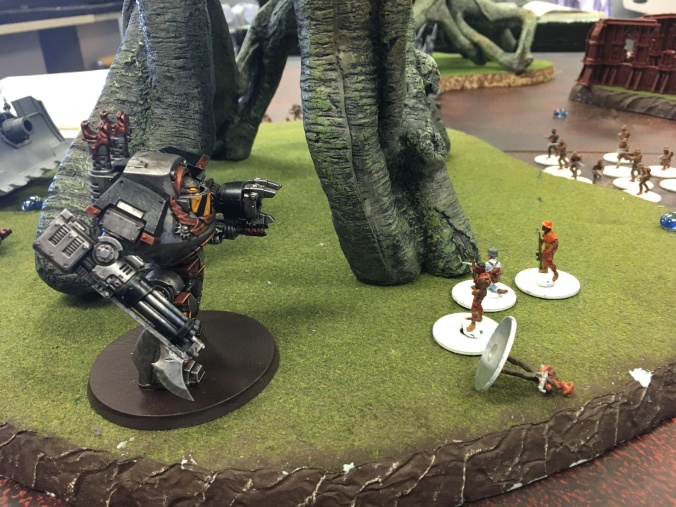 The single surviving Dreadnought engages an assault unit led by Interrogator-Colonel Roach, the commander who defeated Apostle Togast in our previous game. Of course, Roach’s unit quickly retaliated and easily dispatched the Dreadnought with meltabombs. 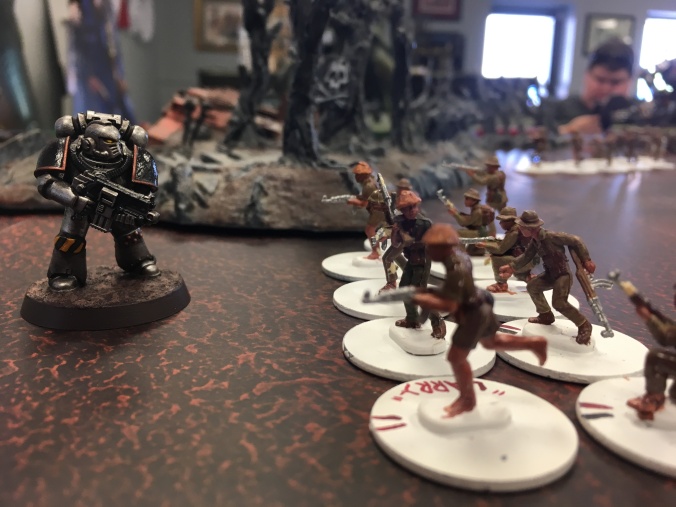 The last remaining (and only painted) Havoc finally closes in on their attackers, but it’s too late to make any difference. 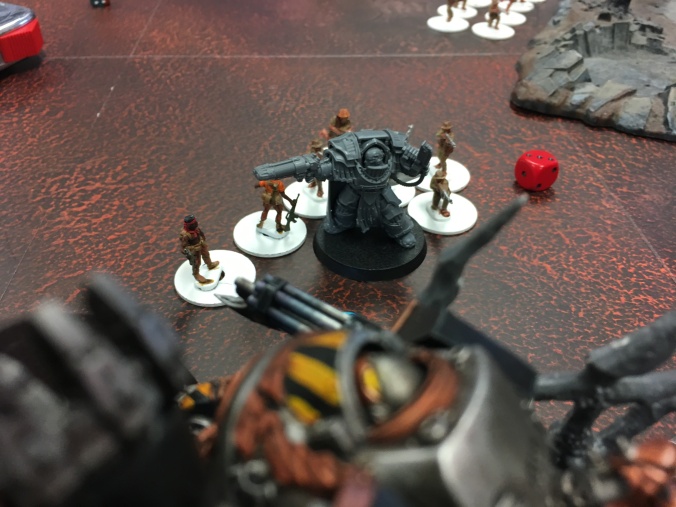 Like his subordinates, Warsmith Chakotei finally makes it into combat (while a ruined Deadnought burns nearby) and promptly gutted Minh Hoang, but it didn’t matter. Even with their commanders dead, the Guard carried the day with ease, and the 18th was lost to the chem-jungle.

Like I said: disastrous. Unable to see their enemies, my Iron Warriors shooting was rendered useless, and the difficult terrain further hindered their already slow movement of 6″-per-turn, as 3rd Edition 40k did not have rules for running!

With the Chem-Jungles claimed by the Conclave, one of the two approaches to Manneus Drath’s citadel has been blown open. Peter and I have already planned the battle for the second approach, which will pit Kar Golan, the last of Drath’s Trident, against Task Force SEBASTIAN among the refineries at the edge of the oil field. We’ve discussed the scenario and our force allotments. I’ve conceded to allow him to ally Space Marines, and in exchange, I will be able to Deep Strike and Infiltrate. So, we’ll see how it goes. Even if the Conclave defeats Kar Golan, they’ll still have to face Manneus Drath once more.

With our 40K campaign game in the history books, we took a break for dinner and plunged back into the Silver Tower with the help of my girlfriend, Katie. 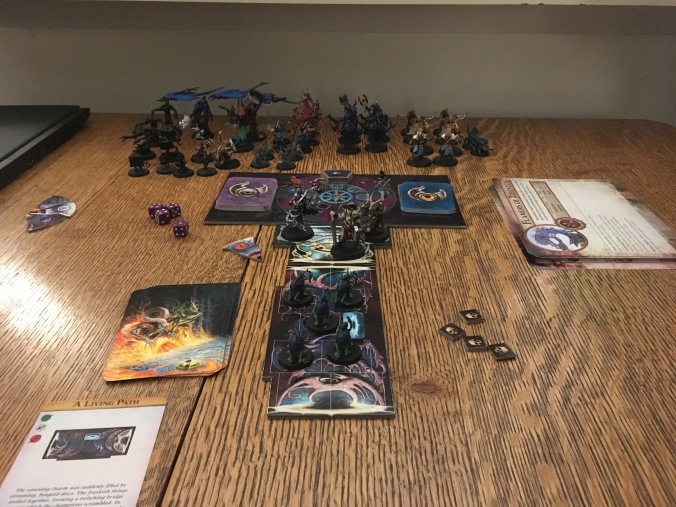 Scuttlings, right out of the gate!

We’ve made it to the Trial of Aqshy, and this time saw the addition of the optional Adversaries. Unfortunately, our time in the Silver Tower was to be cut short, as with all the Age of Sigmar we played the next few days allowed no time to finish the quest, leading us to decide to start it over again the next time we had a chance. The silver lining was, this left us more time for late-night hobby jams… 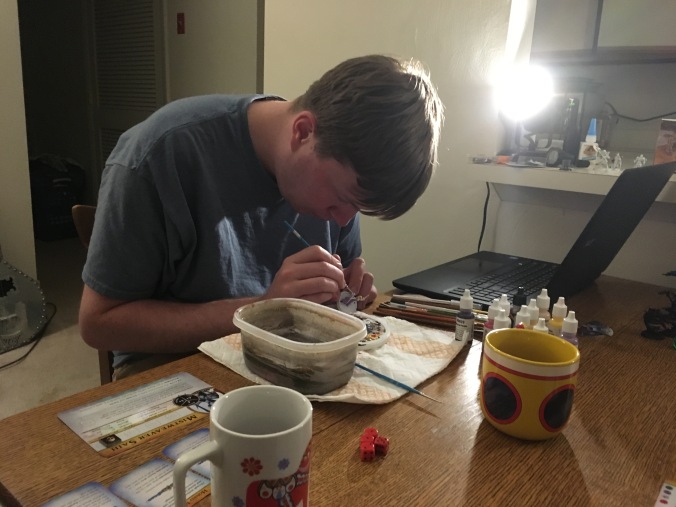 Can you even consider yourself a wargamer if you aren’t painting models for an event, the night of the event?

Now, this is where the real battle began: five games of Age of Sigmar over the next two days… but that’s a tale for another post.