Written by Peter C. of Chicago

On the warpath toward Amasya

Most of the mirth came from the greenskins. Most of the derision came from the Deepkin. The Seraphon and the Sylvaneth, if they noticed Snotgrin at all, were unruffled by the diminutive poet’s manic chanting.

“Free, key, earth, sea!” He darted between massive feet- boots that might have crushed him were carefully turned aside, feet and fins that might have joyfully stabbed him gingerly drawn away. The Orruks had no desire to incur Wapkagut’s wrath by harming the unusually eloquent grot, while the sea-aelves still remembered what had happened to the Namarti who had thought to shut Snotgrin up. It had taken hours.

“Scramble, bramble, up da tree!” Following his own advice, the greenskin made his way nimbly up the trunk of a mulberry tree, coming to rest in the fork of two branches. There he sat, surveying the army passing below him, feet kicking happily back and forth- until a knob of the tree detached itself and crept down towards him.

“Ichor.” The spite’s skin was barklike, and its eyes red and downright malevolent. “Chyme.”

“Flower, rain, dirt an’ mud. Power, pain, guts an’ blood!”  With that introduction behind them, the two settled into a companionable sort of silence for a moment, before-

“Thorns.” The spite- Bloodblossom- extended a single twiggy finger to point at the towers barely visible on the horizon. “Buds. Pus.”

“Maws gnash, claws slash, thunder crash, hammer bash!” The pair shared what might otherwise have been called a knowing glance, before turning back to the city in the distance.

“Blossoms.” The spite’s face twisted into a vicious smile. “Flowers.”

“Blood an’ mud! Blood an’ mud!” Overexcited, the snotling jumped down, landing nimbly on the ground and dancing in a circle, whooping and hollering. “Blood, mud, snot and green!” Behind him the spite crept down the trunk, and then sprang deceptively quickly after the tiny green ball of energy. “Gore an’ guts, wipe it clean! Da flames! Da flames!”

And if any had thought to look closely at the shadows of the pair capering on the edge of the mob, they might have seen that the snot’s silhouette had two heads, and there were massive leafy wings spreading over the spite… 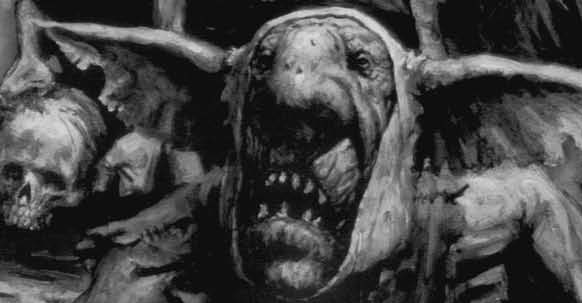