It’s almost here, and Team Animosity has been working around the clock to make it happen. So, what can you expect from us over the next 24 hours? Why, just a couple-two-three little things:

Once a small farming community around a central market-town hub, Bolyany was sparsely populated but always busy, farmer’s wagons pouring into its market square every day and traders from all around the lake would coming to buy produce. The root  crops were withered and meagre by any standard, but still superior to any grown elsewhere around the lake.

Wait, where’s that text coming from, you ask? Why, it’s because aforementioned map will be dropping with…

Local tribes-folk now inhabit the place, a twisted husk of what it once was but still growing some form of crop, namely blood-red sour beets and extremely large varieties of hideous turnip, and pretty much the only source of food around the lake. The sullen masked people whisper prayers to nameless gods, but mostly keep to themselves and tend to their eerie gardens.

In addition to this massive expansion of Animosity II’s campaign setting, you and your Coalition will finally be able to dig into the…

Making contact with Lord-Celestant Han Shinzong- or at least discovering his fate- is first among the Expedition’s standing orders. Unfortunately, the vanguard Anruil Brighteyes sent to range ahead along the Thawing has found itself ambushed and encircled by the beast- and rat-things of the Wretched native to this cursed underworld. Although they’ve found temporary refuge among the local farming folk of Bolyany, it’s only a matter of time before the vanguard is routed or destroyed.

Of course, our Narrative Paths are nothing without…

We’re still putting the finishing touches on the Turn 0 Unfolding Narrative, so you’ll just have to check back tomorrow to read it…

Speaking of #DaWarpath, we’ve got a BIG update coming for the Community page later today or tomorrow with YOUR hobby and narratives. We’ve been struggling to stay on top of the absolute flood photos and stories in the past few days, but don’t mind us- keep ’em coming!

So, that’s what we’ve got going on. But, what about you? Just like your narratives are an integral part of our campaign experience, your enthusiasm is what makes these things happen. With less than a day left on #DaWarpath, what can you do to help? Well, if you know some folks in your local group who like watching Warhammer YouTube videos, why don’t you put them onto this feature we recorded with absolute legend and all-around great guy Doug Griggs from 2+ Tough?

Or maybe they prefer to read their shameless self-promotion the old fashioned way, and would fancy a look at the Introduction to Animosity II we posted last week. No? Well, I don’t know anybody who’s ever turned down a stunning theatrical trailer… or maybe you just need to slap their facebook messenger chat with this little infograph: 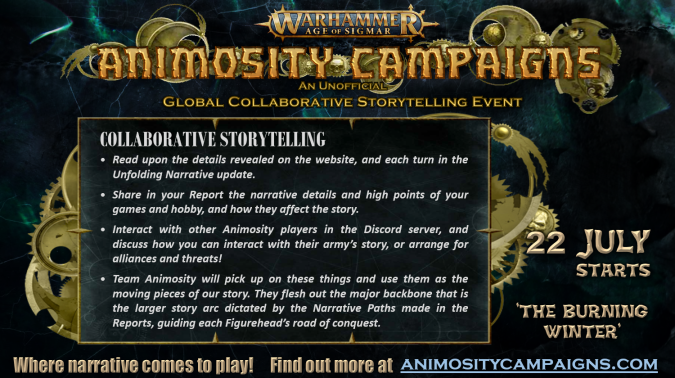 No matter how you help spread the word, every little bit helps. We’re working to build a vibrant and robust narrative play community for Age of Sigmar for years to come, and each and every one of you is a part of that community. So, please, if you have a minute today, let a friend know about Animosity, and we’ll see you- and them- tomorrow, on the frozen surface of Lake Bykaal…

Sincerely,
Alex P.
On behalf of Team Animosity
Join us on Discord!