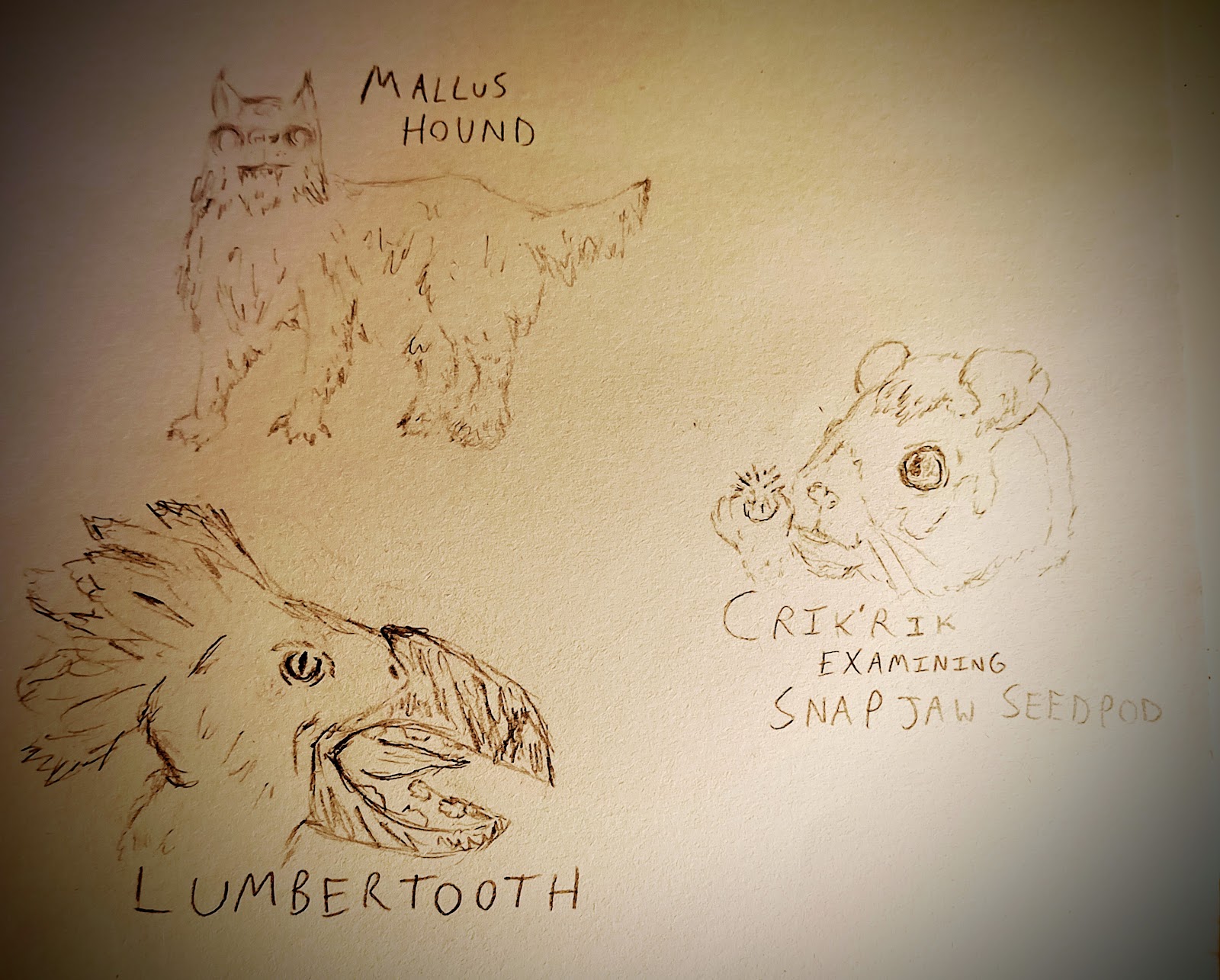 Flora and Fauna of The Bleeding Wilds

Part II: the Peaks of Lahar

It may come as a surprise, then, that upon my return to Lahar to study the effects of the Bleed upon the local flora and fauna, I was met with a startling revelation. Word in the taverns of Fairwater, the closest free city and staging ground for my expedition into the badlands, was that the fabled lumbertooths of the Tor had become, in recent weeks, remarkably easy to hunt. Multiple individual specimens had been found languidly wandering the wastes, while others moved with erratic ferocity, attacking anything and everything around them, from inert rock to their own kind. Though hunters had been quick to take advantage, any who ate the flesh of the birds began to exhibit similar symptoms, with an epidemic of violent outbursts and shivering deaths across the city being traced back to a butcher who had bought the tainted meat.  If it were not for the not insignificant distance between the city and the badlands, I fear that the event would have been far more catastrophic.

I resolved to head into the wastes at the earliest convenience to see the Tor for myself. I booked my way aboard a Kharadron vessel. They did not look kindly upon my abandonment of the code, but took my coin just the same. Upon reaching the Tor it was immediately apparent to me what had happened to the birds: the rocks that they consume to maintain their teeth had been infused with the stuff of Chamon. Growths of stone all across the tor leaked a quicksilver substance, similar in disposition to mercury. I have surmised, therefore, that the ailment is something akin to mercury poisoning, though the substance would have to be far more potent to cause such a magnitude of devastation. I can only hope that the lumbertooth population has the opportunity to recover once all this has passed.

Some knowledgeable readers may be questioning why I have included snapjaw plants among my writings on the mountainous peaks of the Lahar badlands. Indeed, Snapjaw fields are a common threat across Ghur, with no particular favouring of mountain environs. A single seedpod might blanket a square mile of ghurish wilderness in near perfectly camouflaged vegetable bear-traps within a matter of hours, consuming unwary creatures before fruiting and withering away. The subsequent, once again highly camouflaged, seedpods latch to passing megafauna to continue their lifecycle elsewhere. They are, as I well known, prized by the Kruleboy Warclans for their use as biological minefields, though the seedpods are famously difficult to acquire, being that they're near impossible to spot while on the ground and are otherwise entangled in the fur of something very large and very deadly.

It might come as a surprise, then, that there is a people endemic to the Dragonspine mountain range of Lahar that deliberately cultivate snapjaws for food. The rodent-like Crik'Rik people are thought by most scholars to be descended from the Rovskyr of the Starlit Plains of Azyr. They're notable for being much more robust and territorial than their forebears, with strikingly vibrant red and white fur patterns. Though just as intelligent as the Rovskyr, much less is known about the Crik'Rik due to their propensity to violent isolationism. Unless approached with utmost care and respect for Crik'Rik customs, they are like to skewer one on sight. Not that I can blame them, having had more than my fair share of scrapes in the savage lands of Ghur.

After careful study, I did exactly so, and was granted a brief audience with the Alderwoman of one of the Crik'Rik hordes (the best translation of their own word, not a judgement made by myself). Here did she appraise me of their remarkable agricultural achievement: the Crik'Rik have developed an edible strain of Snapjaw that is hardy enough to grow in stark mountain soil, poses little bodily risk to harvesters, and is much more visually distinct than its highly concealed cousin. They travel along the mountains, and at each camp plant a seedpod. Still remarkably fast growing, the edible parts of the plant are harvested, while the rest is left to reinvigorate the soil for the next time the horde passes through. In an exchange of gifts, I was given a seedpod for this remarkable strain of vegetable. Having tasted it in various dishes, I can confirm that the flavour is mild and nutty, with a hint of iron. I have kept the resulting seedpods with me since, and they have been very helpful on the road, conferring a week's worth of decent meals and a new batch of seedpods with each use.

The so-called Mallus hound is another beast with which I can claim no direct contact. Indeed, I regarded the beast as little more than a myth until recently. It was my old friend Nashwar who conferred upon me the truth of the beast when I visited her in Chamon at the very advent of the Bleed, for one such beast had wandered from Ghur in those early days of tumult when we had little idea what was happening; though in retrospect I believe Nashwar had more knowledge of the situation than she let on, for she was already approaching silverside for what she only described as a "venture". She told me of the hound that had come wandering, confused and bloodied, out of the wastes, and filled her cabal's heads with prophecy enough to incapacitate them. This is the hunting method by which the hound takes its name; little do we know of how the Mallus hound produces such an overwhelming onslaught of prophetic vision, but its effect has been likened by those very few survivors as an intensified equivalent to the glimmerings of Excelsis and its Spear of Mallus. I for one can only speculate on such, for Nashwar, whose psychical barriers were strong enough to keep her head clear, duly killed the beast before it had eaten too many gnoblars, and the Cabal feasted upon it forthwith. Sorely disappointed, I was, that Nashwar did not at least keep the brain to send to me for study, as I made very much known. I received only a feline chuckle in response. She did at least provide me with a psychic vision of the creature as she had seen it, from which my illustration is drawn. If Nashwar had known about the nature of the bleed, I do wish she would have told me, for it would have saved me a good deal of travel. I returned to Ghur as soon as possible, knowing that the mountains of Lahar are the only area that Mallus hounds have been sighted, and something must have been very wrong for one to appear in distant Chamon.

As ever, my writings are nowhere close to exhaustive, and there exists a much greater biodiversity within both Lahar and Silverside than I could cover here. Some, like flathorns, carnosaurs and terrorpins have been catalogued extensively, most famously in Dzantaster's Bestiary, owing to their abundance in Thondia, seat of Excelsis, the God King's greatest stronghold in the Ghurlands.

Flora and Fauna of the Bleeding Wilds: Part IV

Flora and Fauna of the Bleeding Wilds Part III

Flora and Fauna of The Bleeding Wilds: Part I

Flora and Fauna of The Bleeding WildsBy Vala Edrasdottír, Adventurer and Natural HistorianPart I: The Badlands of LaharSand-ScurryThese peculiar, humpbacked lagomorphs are endemic to many of the drier regions of the Lahar Badlands. Their splayed, shaggy feet are ideal for quick traversal of shifting sands, while their distinctive jaw-like facial markings do much to deter many would-be predators. Unlike many other creatures of the Lahar deserts, sand-scurries are diurnal, able to withstand the intense heat and carry large quantities of moisture in their humps. Sand-scurries travel in small family groups, burrowing down at night when many larger predators are abroad and bounding many leagues each day in search for nutritious twistree pods. Such is their relative docility, familial loyalty, and talent for sniffing out the sparse groves of twistrees that dot the endless dunes, that they have become a favoured mount of the nomadic Lahareth aelves. I myself had the opportunity to travel with a band of Lahareth for a season, and experienced the remarkable dexterity and surprising intelligence of these beasts for myself.Desert TwistreeGhur may be known primarily for its predators, but pure aggression does not a functioning ecology make. Sand-scurries are obligate herbivores, and their primary source of food comes in the form of the enigmatic twistree. When not flowering or fruiting, these plants appear as gnarled, twisting snags, jutting incongruously from the desert landscape in peculiar clusters. The visible portion of the twistree is a mere portion of the whole, however, and each of these sickly green bowers is a single organism, its roots sinking deep below the skin of ghur to the hidden veins of water beneath. When their vivid pink flowers are fertilised, twistrees sprout bulging, translucent fruiting bodies, each full of thousands of miniscule seeds suspended in a rich amber nectar. The Lahareth aelves prize these pods, which they gather from the trees with long hooks, as a single fruit tapped for its nectar can keep an entire family fed and watered for a week. Wild herds of sand-scurries feast upon the fruit they knock from trees, then, when they burrow beneath the sand at night, excrete the seeds below the earth: the perfect place for them to begin the cycle anew.﻿Twistree AnglerMegafauna of immense size and ferocious strength, twistree anglers are surprisingly subtle in their approach to hunting. These enormous predators, their hideous countenance and strange mix of hippopotamus, fell-bat, and ghurlion, burrow beneath the sand and wait for their prey to come to them. The only visible portion of the monster are its antlers, near-perfect imitations of desert twistrees, down to fleshy, fragrant growths imitating the prized fruit. The single most useful piece of wisdom imparted upon me by my Lahareth companions was this: never harvest from a twistree grove with less than three boughs.

A Brief History of Animosity